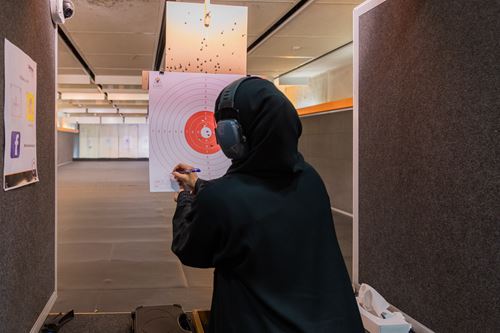 The tournament was held in accordance with international rules and standards, which provided participants with an exceptional experience in a safe environment. This guaranteed the privacy of the event and created an opportunity to develop and discover new skills in shooting. A total of 44 ladies participated in the challenge both professionals and amateurs, of whom 20 women qualified for the 20m finals.

The competitions were exclusive to UAE nationals aged 16 years and above. A total cash prize of AED 15,000 was allocated to the top three winners. The Academy, in cooperation with The Caracal Shooting Club and Al Forsan International Sports Resort, provided equipment and ammunition.  The organizing committee was keen to explain the details, safety rules and everything related to the final regulations before the competition began to ensure safety for all.

They emphasized on the importance of ladies’ participation in such events as it contributes greatly to the dissemination of health culture along with practicing sports of all kinds helps raise the spirit of competition and challenge. This reflects the objectives of the Academy that they are implementing on the society, the team will continue to organize such tournaments in the coming periods. H.E. Naema Abdulrahman Al Mansouri added saying:

“The participation of many ladies in the second edition during such exceptional circumstances, represents the determination and strength of Emirati women in practicing their sports and hobbies. It is evidence of the Academy’s continuous success, leading to greater presence in many local sports competitions, community and international events. In line with the interests of women in the community, regardless of age and nationality. Sports is an essential part of daily lifestyle and empowers women, hence our hard-working team is keen to provide all the support for women to promote and transfer these values to the new generation."

Dr. Omniyat Mohammed Al-Hajri continued emphasizing on the strategic goal to be achieved by women's sport in the UAE. She mentioned: "Through our work at the Academy, we work to increase the number of women's activities in society. Also, expand the National achievements, with a focus on developing work strategies that enhance the capabilities of Emirati women. This is for their own achievements and success at various levels.”

Lastly, Mr. Obaid Al Mazrouie, General Manager of Caracal Shooting Club concluded the day by saying: “We are grateful for the Academy for this collaboration, and glad to see that so many ladies have taken to shooting during the championship.”