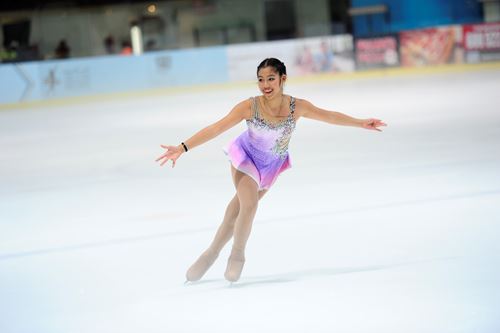 Under patronage of H.H Sheikha Fatima Bint Mubarak, Chairperson of the UAE General Women’s Union, Supreme Chairperson of Family Development Foundation and Chairwomen of the Supreme Council for Motherhood and Childhood “Mother of the Nation”; the Fatima Bint Mubarak Ladies Sports Academy organizes the second version of the FBMA Figure Skating Cup which will be hosted in Abu Dhabi Ice Skating Rink  in Zayed Sports City for two consecutive days. This cup is organized by the academy with cooperation from Abu Dhabi Sports Council and UAE Ice Sports Federation,  and  under the supervision the International Figure Skating Federation.

T he tournament is going to be held with the notable attention and following from H.H Sheikha Fatima Bint Hazza, Chairwoman of the Fatima Bint Mubark Ladies Sports Academy (FBMA), President of the Abu Dhabi Ladies Club, and with the sponsorship from “Ana Zahrah” and “Zahrah Al- Khaleej” magazine and “Healthpoint “ hospital.

The Cup’s competitions will include the participation of Four Emirati players, including the distinguished international figure skater Zahrah Lari , who will be competing despite the previous injury she had, and she is looking forward to land the title of cup this year in order to realize her ambition to compete in the upcoming Olympic Games , additionally; this year’s version will witness the participation of 66 players who come from 18 countries from across the world including UAE, Armenia, Australia, Austria, the Chinese Taipei, Germany, India, Indonesia, Kazakhstan, Korea, Malaysia, Poland, Russia, Singapore, Sweden, Thailand and Ukraine, while  the competitions will comprise of three categories (Junior, Intermediate and advanced) for both adults and minors starting from 10 years old.

The Cooperation and partnership between FBMA and UISF have resulted in a great success in building a notable base of players and enabled the improvement of the players’ skills and expertise through the participation in international tournaments beside the direct support that the academy provide for the Emirati players as represented in hosting training camps and facilitating participation in international competitions.

The Cup’s opening ceremony will start today at 1:30 pm and will mark the beginning of the First day’s competitions which will continue until 9:00 pm.

On Saturday 23rd of January 2016 which represents the second day of the cup’s events; the second day competitions will start at 12:30 pm and will go on until 7:30 pm and will be followe by the concluded with a demonstrative performance by the Emirati Champion Zahrah Lari and other Emirati figure skaters, starting from 7:30 pm until 8:00 pm, while the awarding ceremony will start at 8:15 pm.

Raisa Al-Kutbi, the Operation Director at the academy praised the H.H Sheikha Fatima Bint Mubarak, for her constant patronage and support for improving the status of women in all different fields to empower women to achieve their own ambitions and aspirations, Al-Kutbi also expressed her sincerest gratitude and appreciation for H.H Sheikha Fatima Bint Hazza, for the important role she plays in sponsoring and developing the promising talents and for her support to the aspirations of young Emirati  women in all sports games.

Al-Kutbi Stressed that all the academy’s plans and programs, including hosting and organizing championships, tournaments and international conferences; comes in the light of the academy’s conviction in the importance of partnerships that brings the academy together with various sports federations as it represents the corner stone for laying integrated plans and for accomplishing the academy’s goals that are aimed towards serving the ambitious aspirations of female athletes.