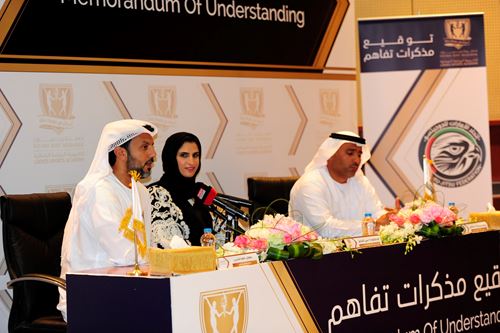 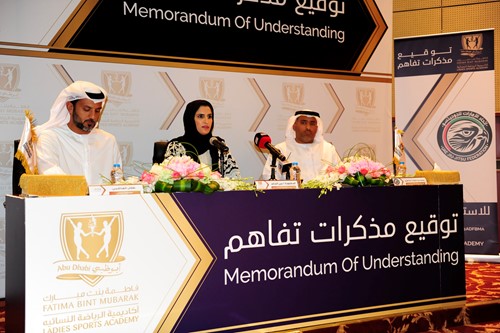 the Fatima Bint Mubarak Ladies Sports academy (FBMA) signed a memorandum of  understanding with the UAE Jiu jitsu Federation during the press conference held in the FBMA headquarters on Wednesday, the M.O.U. was signed by Mohammed Bin Dulmouk  Al-Dhaheri, Board Member of the UAE Jiu Jitsu Federation, and Dr. Mai Al- Jaber board member of Fatima Bint Mubarak Ladies Sports Academy, which was attended by Talal Al Hashimi as a representative of Abu Dhabi Sports Council.

The M.O.U is aimed towards elevating the participation of girls and ladies in the activities of jiu jitsu both vertically and horizontally, and to reinforce their presence in the international competitions in order to accomplish more Achievements in the march of Emirati Ladies sports.

The M.O.U contains several  clauses that stipulate the cooperation, where the academy will be responsible for providing training halls and venue in which participating Ladies will be trained by expert jiu jitsu training addition to holding academic lectures that emphasize on the important role played by jiu jisu, and beside holding  workshops to qualify participants throughout the year, in addition to providing medical service to the participants in the activities stipulated by the M.O.U. and planning training programs in coordination with the UAE Jiu Jitsu Federation which in it’s part will be responsible providing technical Support and training for technical and administrative staff Throughout the year , also the federation will supervise  the training programs and the provide training equipment and monitor and evaluate trainers in the training centers that will be established by the FBMA.

In his part, Talal Al Hashimi stated That women's sport has achieved great successes and it all because of the great support given to it by our wise leaders, and the leading role of Her Highness Sheikha Fatima Bint Mubarak "Mother of the Nation" in supporting women sport in the society, stressing that Abu Dhabi Sports Council under the chairmanship of His Highness Sheikh Nahyan bin Zayed Al Nahyan , adds great importance to the development of the Women sports sector, praising the care and support of Sheikha Fatima girl Hazza bin Zayed Al Nahyan, chairwoman of the board of Fatima Bint Mubarak Ladies Sports Academy, and president of Abu Dhabi ladies Club, in which she has become a leading model in the development, enhancement and the promotion of the successes of women's sports.

For her part, Dr. Mai Al Jaber stressed that the unlimited care of Her Highness Sheikha Fatima Bint Mubarak president of the General Women’s Union Chairman of the Family Development Foundation and president of the supreme council of Motherhood and Childhood ( Mother of the Nation), and the wise guidance of Her Highness  Sheikha Fatima Bint Hazza Chairman of the Fatima Bint Mubark Ladies Sports Academy, are  a never ending source of support to the accomplishments and successes of the Emirati ladies march in the field of sports. Dr. Mai also stated that the M.O.U signed with the UAE Jiu Jitsu Federation is one of the excellent steps that came due to the directive of Her Highness  Sheikha Fatima Bint Hazza determination to encourage Emirati women to practice jiu jitsu in a wider Manner.

Al-Jaber added that the academy is highly interested in realizing partnerships that enhance the progress of women in all sport games, as the academy plays an important role in providing modern programs and initiatives that serve the ambitions of Emirati women in the sports domain, and proceeding from the academy’s plans and strategies that strive to achieve an effective participation of women in all the local and international competitions. Dr. Mai continued to say that the M.O.U. is a new addition to the academy’s partnerships with numerous sports organizations and the academy hope to realize the intended positive results through the implementation of this M.O.U. to yield more progress and success for the field of women sports.