Wam: The Fatima bint Mubarak Ladies Sports Academy, FBMA, signed a Memorandum of Understanding with the UAE Taekwondo and Karate Federation during a press conference that was held at the FBMA headquarters earlier today.

During the signing ceremony Dr. Moza Al-Shehhi said, '' The successes of the march of Emirati ladies in the field of sports could not reach such level of progress without the unlimited care of H.H. Sheikha Fatima bint Mubarak, Chairwoman of the General Women's Union (GWU), Supreme Chairwoman of the Family Development Foundation (FDF) and President of the Supreme Council for Motherhood and Childhood, Mother of the Nation, and the dedicated support and guidance of Her Highness Sheikha Fatima bint Hazza, Chairman of the Fatima bint Mubarak Ladies Sports Academy, and President of the Abu Dhabi Ladies Club. 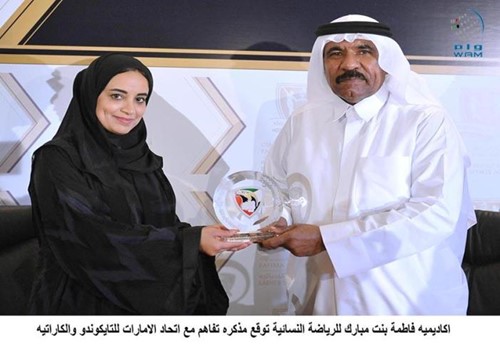 The focus of the MoU is to ensure that more girls are practicing the sport of Karate by providing superior training in a safe and private environment. The academy and the federation aim to achieve a noticeable presence for UAE ladies in the international field of these sports.

The MoU has several clauses that stipulate cooperation between both parties with the goal of spreading awareness about these sports in Abu Dhabi and other emirates by combining the federation’s technical expertise and the financial, marketing and media support of the academy.

This collaboration will begin with weekly open training sessions hosted by the academy in Abu Dhabi and sponsorship for the national athletes to represent the UAE in training camps and international competitions in Indonesia and Japan.

Dr. Al-Shehhi added, "the MoU with the UAE Taekwondo and Karate Federation is a result of Her Highness Sheikha Fatima bint Hazza’s strong leadership in motivating Emirati youth to become more active, and the academy's continuous efforts to facilitate a healthier and more active lifestyle.''.

Dr. Al-Shehhi commended the efforts of the UAE Taekwondo and Karate Federation, led by Major-General Nasser Al Rozouiqi, President of the Federation, on his guidance through the major growth of the sport in the nation.