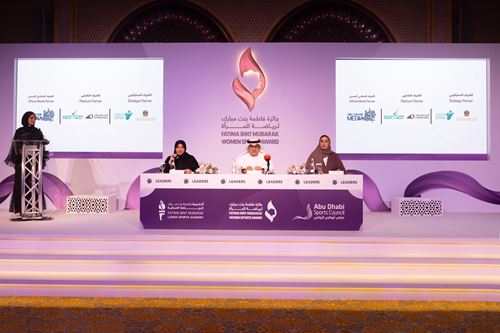 The award is the first of its kind in the region, as it mainly aims to empower women and highlight their achievements, especially in the sporting sector.

She emphasised the award represents a new incentive for the development and for sportswomen in the UAE as well as in the Arab and international levels with the continuous recognition and support of HH Sheikha Fatima bint Mubarak, Mother of the Nation.

“We are honoured of the value and status this award holds and its pioneering role in supporting the creative and influential values in the world of sport to motivate and encourage sportswomen,” Sheikha Fatima bint Hazza, said.

“The award with many categories is an inspiration for outstanding sportswomen, and women of creativity and excellence in both the local and international circuits. Wish all participants success.”

The announcement came during a press conference held by The Academy and Abu Dhabi Sports Council on Thursday, July 7, 2022 at the Emirates Palace.

The registration for nominations opened on July 7 and will close on August 8, while the shortlisted candidates will be announced on September 9 and the awards on September 17.

Competition categories within this award includes both individual and collective levels in various departments such as sports management, training, research, sports sponsorship, and women of determination. The total money prize for the award is AED1,300,000, and the categories for this year at the individual level include:

As for the categories at the level of institutions and sports’ federations, they include:

“The event is held under the generous patronage of Her Highness Sheikha Fatima Bint Mubarak, Mother of Nation, and President of both the General Women’s Union and the Supreme Council for Motherhood and Childhood, Supreme Chairwoman of Family Development Foundation.

“Through this award, Fatima Bint Mubarak Ladies Sports Academy seeks to shed light on women's sports and on the experiences of inspiring women in the sports sector, with the participation of a group of the most prominent personalities, influencers in the world of sports. (This Academy is) emphasizing the consolidation of the academy’s role in empowering women and enhancing their impact in different sectors, especially the sports sector.

“In addition to achieve the vision of the UAE government in building a sporting and healthy society, we pursue these ambitions in the Academy through our strategic pillars that can be summed up in community engagement, research and education, preparing sports teams, organizing events and tournament, media and marketing, and enabling capabilities.”

Aref Hamad Al Awani, General Secretary of Abu Dhabi Sports Council, said, "We extend our deepest gratitude to the pioneering role and generous support given by the "Mother of Nation" to women in various fields.

“This support had a prominent impact on the renaissance and progress of women's sport in the UAE and the Arab world. The award is an extension of Her Highness’s role in giving to community and nation. Thanks to Her Highness’ support, women gained the trust of UAE leadership and UAE society and were able to embody historical achievements for the nation and its pioneering path.”

He continued, “We extend our thanks and appreciation to the Supreme Committee for the Award, headed by Sheikha Fatima Bint Hazza Bin Zayed Al Nahyan, Chairwoman of the Board of Directors of Fatima Bint Mubarak Ladies Sports Academy, President of Abu Dhabi and Al Ain Ladies Clubs, who pays all attention to achieving excellence and progress in women's sports. Her Highness has a great role in launching Fatima Bint Mubarak Award, in its sixth edition, to become a platform for women of will, innovators and outstanding people, and its direct and important reflection in inspiring promising generations and motivating them to excel in all sports events.”

“We emphasize the importance of the award and its role in enriching the women's sports movement, not only on local level, but also on regional and international levels.

“In addition to the role that the award will play in motivating young Emirati women to achieve more in the upcoming international sports events. Especially, the award categories are diverse. It includes individual and collective levels in various fields such as sports management, training, research, sports and media sponsorship, women of determination, and creative sports initiatives.”

Maryam Al Mansoori, Head of Technical Support and Training Programs at the Fatima Bint Mubarak Ladies Sports Academy, said, “Since its inception ten years ago, Sheikha Fatima Bint Mubarak Women’s Sports Award has emphasized the honourable position that women have attained in all fields and led them to open the doors of excellence and creativity in the sports sector.

“The award aims to support and encourage women athletes, within pioneering and sustainable visions.”

Those wishing to nominate for the award can register through the website http://fbmwomensportsaward.ae/

The Fatima Bint Mubarak Ladies Sports Academy (FBMA) is a not-for-profit government entity of the Emirate of Abu Dhabi, the capital of the United Arab Emirates. Established in October 2010, the Academy is headed by its Chairwoman, HH Sheikha Fatima Bint Hazza Bin Zayed Al Nahyan, and is dedicated to promoting and facilitating women’s sports in the UAE.

The FBMA serves this significant mission by hosting a number of local, regional and international sports events, facilitating community activities, managing and developing local talent and through its education and research work. In fulfilling its mandate, FBMA partners with the Abu Dhabi Sports Council and other relevant Government entities and sports federations

ADSC is aligned to the emirate’s leadership vision to develop sport and youth activities. The Council promotes an effective, emirate-wide sports calendar that stimulates the desire to participate in quality sports among all Abu Dhabi residents and helps the talented and motivated reach their sporting potential.

The sports council supports the organisation and hosting of many international sporting events in Abu Dhabi.