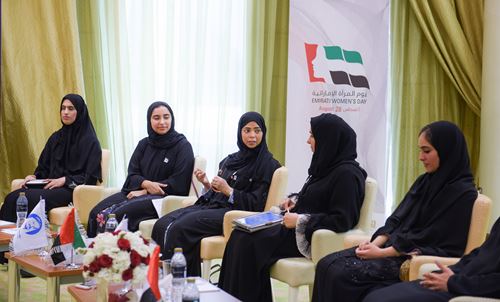 27 August 2018, Abu Dhabi, UAE: For the past four years the Fatima Bint Mubarak Ladies Sports Academy (FBMA) has celebrated Emirati Women’s Day unequivocally, as the Academy continues to develop the role of women in society through sport. And this year, it will be done so at FBMA’s new home, the Abu Dhabi Ladies Club, in the attendance of H.H. Sheikha Fatima Bint Hazza Bin Zayed Al Nahyan, Chairwoman of the Fatima Bint Mubarak Ladies Sports Academy (FBMA) and Chairwoman of the Abu Dhabi and the Al Alain Ladies Clubs.

As the link between sport and Emirati Women’s Day continues to grow, a legacy is beginning to take shape between UAE women and the importance of sport in their lives. The significance of this link is highlighted by H.H. Sheikha Fatima Bint Hazza Bin Zayed Al Nahyan, who said:

“Since its inception in 2015, Emirati Women’s Day continues to pay homage to the creation of the UAE’s General Women’s Union in 1975, and we are privileged to highlight this day for a consecutive fourth year, and this time at the home of Abu Dhabi’s female community, the Abu Dhabi Ladies Club.

“As we strive to make sport an element of daily life for UAE national women of all ages, backgrounds and physical conditions, the celebrations endeavour to fulfil our vision of continuously promoting, developing and facilitating women’s sports in the UAE,” added H.H. Sheikha Fatima.

H.H. Sheikha Fatima Bint Hazza referenced how the Mother of the Nation has made it a lifelong mission to provide opportunities for Emirati women in every sector of social activity. And ADLC is testament to such a mission after it opened in July this year: “Our mission of inspiring behavioural change amongst the community in favour of an active lifestyle is coming to fruition,” said H.H. Sheikha Fatima Bint Hazza. “The Ladies Club strives to inspire ladies to be part of an active, happy community, and we at FBMA support this wholeheartedly.”

H.H. Sheikha Fatima Bint Mubarak announced earlier this year that the theme for the 2018 edition of Emirati Women’s Day will be ‘Women on the Course of Zayed’. The goal of this respected day is to highlight the accomplishments of women and honour them for their efforts and perseverance in achieving their goals, which will empower them in all professional and technical sectors and enable them to continue their success with confidence. That said, H.H. Sheikha Fatima Bint Hazza has embodied this vision, stating: “Over the past five years, the Academy has created numerous opportunities not only for athletes but for female referees, coaches, and administrators. The Academy must remain active in order to get the UAE community active, so working with avant-garde facilities like ADLC allows us to deliver on one of our mission pillars to create a safe and culturally adequate environment for Emirati women to train and practice sports in.”

ADLC, a state-of-the-art facility that opened only last month and was home to the joyous occasion. The club has already begun to live up to its vision to provide a home for the Emirate’s female community, as a series of seminars, fitness classes and cooking workshops were held.

Following the celebrations, FBMA will continue to work closely with ADLC. The club, laden with world-class sporting equipment, a pristine spa and a dedicate kids zone is the ideal place for the capital’s women to continue their active lifestyle journey.