Under the Patronage of Her Highness Sheikha Fatima Bint Mubarak

Just like the opening day, spectators at the Abu Dhabi Equestrian Club were treated to an entertaining day of action with the riders from the UAE, region and across the world putting on some strong performances.

His Excellency Major General Doctor Ahmed Naser Al Raisi, President of the UAE Equestrian and Racing Federation, and President of Interpol said: “We are proud of all the riders who have competed in the 9th edition of the Fatima Bint Mubarak Ladies Sports Academy’s International Show Jumping Cup, which was held under the patronage of Her Highness Sheikha Fatima Bint Mubarak, and wish all of the riders the best to come.

This edition of the cup witnessed a great turnout, with 230 male and female riders participating from 26 countries from all over the world. Over the years, we have witnessed the emergence of Emirati female riders who have made tremendous advancements in the sport. The cup, organized by Emirati talent, has over the years developed impressively and represents great pride for us, and we look forward to the success of the future editions.”

The first event of day 2 of the 9th FBMA International Show Jumping Cup started off with an impressive performance from the young Emirati riders in the CSIY-A category with top 3 representing the UAE. Mohamed Hamad Ali Al Kirbi (Catch The Wind II) came out on top with a time of 62.68 seconds, followed by Saif Awaida Mohammed Al Kirbi with only 0.17 seconds separating him from the round win, and finally, Omar Abdul Aziz Al Marzooqi secured third-place with a time of 68.57 seconds.

12-year-old Emirati rising star Mabkhout Owaida Al Kirbi (Zandocan C) swept the show once again, dominating in the second event of the day, CSICh-A, after taking home the win yesterday in the same category with 69.97 seconds in round one and 33.19 seconds in round two (jump off). Taking second and third place in this category were Nastassia Klats of Bulgaria and Ali Mufrrej Ali Mohamed Alkarbi from the UAE.

Commenting on his second win in this year’s edition, Al Kirbi said: “To win my second competition in two days is an indescribable feeling. I look forward to this competition every year as it’s one of the most prestigious events it means a lot to me to take home this win.”

In the National Class, South African rider Victoria Jade Laing (Coming Next) scored first place with a remarkable winning time of 52.66 seconds in phase 1 and 23.61 seconds in phase 2. The event was the third category of the day and witnessed 90 female competitors battle it out for a total of 3 hours. In second and third place respectively were Hessa Rashed Al Makhawi and Wassayef Abdul Aziz Al Marzooqi both representing the UAE.

The fourth event of the day, CSIJ-A, witnessed, yet again, another win from UAE national Abdalla Hamad Ali Al Kirbi (Corando 11) with a whopping winning time of 73.29 seconds and 47.31 seconds on the Jump Off. Another UAE national, Saif Awaida Mohammed Al Kirbi (73.77), came in second place, with third place going to the Saudi Arabian rider, Abdulaziz Al Eid (70.21).

The next round was the Accumulator with Joker (CSIL2), and an impressive performance was displayed by the princesses of Saudi Arabia. Her Highness Princess Al Jwharah Bint Mansour Al Saud (Grunnerger Kwiebus) secured first place with a time of 55.51 seconds, and Her Highness Princess Watfa Al Saud claimed second place with quarter a second separating her from first place. Representing Great Britain, Harley North-Bryan went on to secure third place in this category with a time of 59.01.

Her Highness Princess Al Jwharah Bint Mansour Al Saud said: “I am extremely proud of my performance; it is my first time competing at the FBMA in the UAE. I plan to move on with this sport and claim world titles in the World Cup and in the Olympic Games.”

Ukranian rider Alisa Danilova (Fiori Ls) achieved first place in the One Round Against the Clock event (CSIL2) with an impressive time of 55.7 seconds, while yesterday’s winner Aya Hamcho secured second place position with a time of 58.39, and Amelia Moscicka of Poland won third with a time of 65.98.

The FBMA International Show Jumping Cup will come to an end on Sunday with 6 events scheduled on the final day including a Dressage event. The three-day competition has attracted one of the biggest competitor fields with more than 230 riders from over 20 countries competing across 18 event categories for a total prize pot of AED685,000.

Members of the public can catch all the action by watching the live streams on YouTube and on Yas TV. For more information, please visit here. 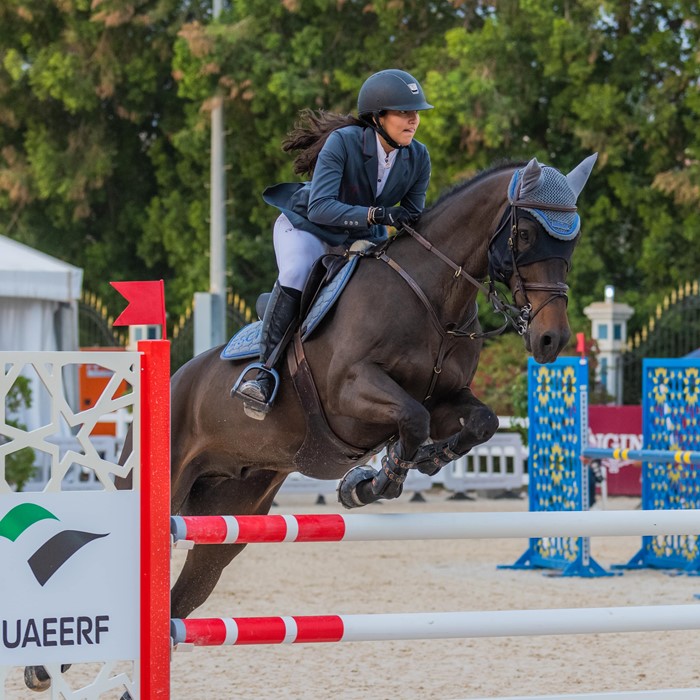