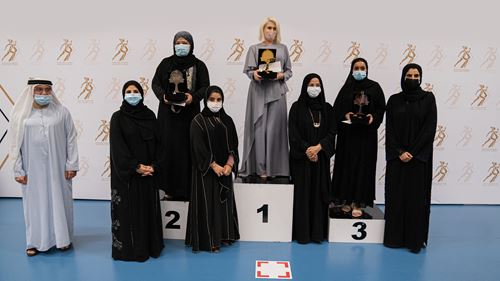 The Ukrainian International participant Ava Suleimanova was announced the first place winner of the second FBMA Blitz Chess Tournament that was held on Wednesday 16th of December at the Abu Dhabi Ladies Club Sports Hall, Under the patronage of H.H Sheikha Fatima Bint Hazza Bin Zayed Al Nahyan, Chairwoman of FBMA, and President of the Abu Dhabi and the Al Ain Ladies Club, in collaboration with the Abu Dhabi Sports Council and Abu Dhabi Chess & Culture Club, with the participation of 85 players from 14 nationalities, competing for cash prizes of 25,000 dirhams.

Ava Suleimanova scored eight and a half points out of nine rounds, winning all her matches and tied in only one with the distinguished player Zainab Al Maamari

H.E. Dr. Mai Ahmed Al-Jaber, Fatima Bint Mubarak Ladies Sports Academy Board Member expressed her happiness towards the distinguished organization and appearance of the 2nd FBMA Blitz Chess Tournament. She confirmed that the female element ensures the success of any event. She continued to thank Abu Dhabi Sports Council,  Abu Dhabi Ladies Club and Abu Dhabi Chess and Culture Club, for their continuous efforts and support of the successful tournament, saying: "We promise to organize more of these events that women of the society look forward to and have a positive active role in participation, competition and advancement"

H.E. Naema Al-Mansouri, FBMA Board Member Added: " We do everything we can, in order to provide support to all participants of the tournament. This is only proves the objectives and strategy of the organization as a whole, we have seen competitors with great skills praised by the technical team and referees, who in turn assigned the winners based on speed as well as intelligence. We trust the referees decisions and thank them for their efforts during the tournament.”

Hussein Al-Khouri, Chairman of the Abu Dhabi Chess and Culture Club, thanked all those in charge of The 2nd FBMA Blitz Chess Tournament, starting with H.H Sheikha Fatima Bint Mubarak, Mother of the Nation, Chairwoman of the General Women's Union (GWU), Supreme Chairwoman of the Family Development Foundation (FDF) and Chairwoman of the Supreme Council for Motherhood and Childhood, saying: “We appreciate the efforts made by the Academy in cooperation with the Abu Dhabi Ladies Club and the Abu Dhabi Chess Club to organize and succeed the second edition of this tournament, which is the first of its kind this year. We were surprised by the number of participants, especially after almost a year of suspending community events.”

FBMA Board Member H.E. "Amal Al-Afifi,” confirmed the importance of establishing tournaments and community events during this period, and also for everyone to stay healthy and active, as this tournament completes the sports programs developed by the Department to disseminate health education and community awareness of the need to follow the patterns that ensure the safety of everyone. We are happy to see passionate participants who came to compete and continue to progress regardless of the obstacles and challenges. What impressed me was to see seven-year-old players possessing the strong character to compete with older and experienced players.

It is worth mentioning that Abu Dhabi Chess & Cultural Club, is offering training classes for all levels and for anyone who wants to learn chess or develop their skills, also to increase the number of participants in international and local tournaments. Also, to focus on the participation of all segments of society in chess because of the game’s outstanding value and its value in the international and Arab level, were they eased the registration process through the club’s official website www.abudhabichess.com, which explains the registration process to who wishes to participate and learn.