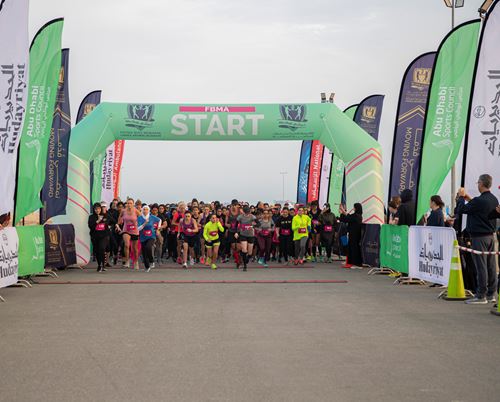 A year of achievements despite challenges

Fatima Bint Mubarak Ladies Sports Academy has achieved many successes in its remarkable journey towards expanding the base of women who practice sports under the slogan "Moving forward”. Preparations for the new year has begun on Fatima Bint Mubarak Ladies Sports Academy’s agenda after a year of challenging achievements, especially during the difficult circumstances of the world that prevented many different sports events in 2020.

The new Covid-19 virus did not prevent the Academy from developing programs and plans that encourage women to exercise in the UAE under the umbrella of the national initiative to address this pandemic with sports, in an effort to highlight the role of women in the embodiment of harmony and cohesion among members of the society, to become a source of productivity and positive energy.

During this season; the Academy has gained many achievements in all fields, whether by holding a virtual sport seminars and workshops or organizing community events, competitions and sports challenges. Under the wise leadership and with the support of H.H. Sheikha Fatima Bint Mubarak, Mother of the Nation, Chairwoman of the General Women's Union (GWU), Supreme Chairwoman of the Family Development Foundation (FDF) and Chairwoman of the Supreme Council for Motherhood and Childhood "Mother of the Nation", who has always believed in the abilities of Emirati women. Also 2020 coincided with the 10th anniversary of the Academy, and at that time the new logo was revealed, that reflects a new era of goals and aspirations.

The events held by the Academy included various activities targeting all segments of the society, where it launched an initiative of it’s founding anniversary of 10 million step challenge resulting in nearly 13 million steps in just three days. In addition to virtual events, most importantly being the virtual run, which was done through the social media pages, until the organization of championships was done in accordance with precautionary and preventive measures such as; the Abu Dhabi Fishing Championship, archery tournament and Blitz Chess tournament all dedicated to women. Also, a series of special trainings for academy’s teams such as volleyball and equestrian have been resumed in preparation for the upcoming official tournaments.

The Academy aims to support sports as an essential element in women's daily lives, ensuring that they adopt a healthy and active lifestyle in the country level. The agenda for the coming season also includes many events and activities, most notably the 2nd Bowling tournament for ladies, the 7th FBMA ladies Run, the ladies karting race, the 8th FBMA International Show Jumping Cup and many community events, seminars and workshops.

H.H Sheikha Fatima Bint Hazza Bin Zayed Al Nahyan, Chairwoman of FBMA, and President of the Abu Dhabi and the Al Ain Ladies Club, continued to publish motivational messages for Emirati women and their achievements, proudly recalling the achievements gained by the determination of Emirati women, and stressed that the Academy will always stay as a platform to launch the energies of Emirati women, to reveal their creativity and to give them the opportunity to prove themselves in their march towards a promising sporting future.