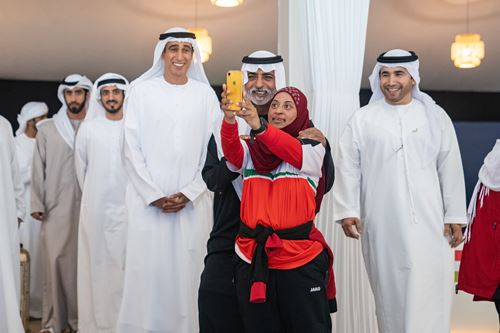 The annual cup, which reinforces Abu Dhabi’s position as a global leader in sports, welcomed more than 221 riders from 26 countries. The cup saw high engagement from Emiratis and showcased top national and global talents in equestrian sports.

The cup was attended by influential figures in the UAE, including:  HE Sheikh Nahyan bin Mubarak Al Nahyan, UAE’s Minister of Tolerance, who crowned the winners of the International Ladies class (CSI2) category on the final day of the cup, as well as Chief Executive Officers of key partners, representatives from different embassies, among others.

The first-place winners announced on the third and final day of the cup were Danish national Tina Lund for the CSIYH1 category; Saudi national Abdullah Alghamdi for the CSIY-A category; Georgia Tame from the United Kingdom for the CSIL2 category; Aisha Mohamed Al Maazmi for the female nationals’ category; and Sara Hussein Saleh Al Armouti from Jordan for the CSI2.

Her Highness Sheikha Fatima Bint Hazza Bin Zayed Al Nahyan, Chairwoman of FBMA, and President of the Abu Dhabi and the Al Ain Ladies Club, said: “We were proud to see the turnout that the seventh FBMA International Show Jumping Cup saw from different community members of different age ranges. We were also proud to see how 70 Emirati girls took part in the amateurs’ national category, which is the largest number we get for this category in the history of the cup. We hope that these young women make outstanding achievements in sports in the future.”

“I would like to thank HH Sheikha Fatima Bint Mubarak, Mother of the UAE, for her continuous support to make this event successful and HE Sheikh Nahyan bin Mubarak Al Nahyan for his attendance and his inspiration. I would also like to thank the organizing team for their amazing efforts for making this event an outstanding event.”

“We are always honoured to be hosting national and international competitions that attract participation from the world’s best talents. Aside from being an internationally recognised show jumping cup, the event also drives engagement from all community members with the family-friendly atmosphere it provides,” Her Highness added.

Major General Dr. Ahmed Naser Al Raisi, President of the UAE Equestrian and Racing Federation said, “FBMA has made a major leap for women in sports in the UAE and the whole world, whether through the initiatives that it launches or the international championships that it hosts. I would like to thank HH Sheikha Fatima Bint Mubarak, Mother of the UAE, for her continuous support and HH Sheikha Fatima Bint Hazza Bin Zayed Al Nahyan for her guidance to ensure that FBMA International Show Jumping Cup matches the top international standards and counts as one of the top equestrian championships in the region and the world.”

“I am honoured to see Emirati riders being crowned at FBMA International Show Jumping Cup, which reflects the real success and I hope that Emirati riders always strive to raise the UAE’s flag in international cups,” Al Raisi added.

The annual cup plays a key role in empowering women through sports, as well as encouraging youth and Emirati nationals to take part in raising the name of the UAE in show jumping international cups. The cup also saw significant attendance from people of determination from Special Olympics UAE organisation, encouraging them to get involved in sports activities and lead a healthy lifestyle.

The 3-day cup attracted community members, who enjoyed the vibrant atmosphere and the offerings of the Equestrian Village, which provided food trucks that satisfy all cravings, as well as fun family-friendly activities for visitors of different age ranges. The cup also saw two engaging workshops, the ‘Secret Garden Workshop’ and the ‘Sports Photography Workshop’.